An artist, architectural designer, curator, cultural critic, and social activist, Bingyi (b. 1975, Beijing) has developed a multi-faceted practice that encompasses land and environmental art, site-specific architectural installation, musical and literary composition, ink painting, performance art, and filmmaking. Adopting a non-anthropocentric perspective and channeling nature’s creative agency, her work is centrally concerned with the themes of ecology, ruins, rebirth, and poetic imagination. After pursuing university-level studies in biomedical and electronic engineering in the United States, Bingyi earned a Ph.D. in Art History and Archeology from Yale University in 2005 with a dissertation on the art of the Han Dynasty.

In her large-scale ink paintings, Bingyi uses ink as “dark light” —carbon, an absolute absorber of light, in water, nature’s universal translucent solvent—to illuminate the usually invisible and transient physical processes that enable ordered patterns and forms to arise from chaos. Over months or even years, she collaborates with the environmental conditions of a specific site to capture a reality-scaled record of the climatic and topological forces shaping a natural or urban landscape. She then uses installation and performance to recuperate these forces in the live embodied experience of the viewer.

In October 2013, she occupied the center of Toronto’s city hall to create a 1,800 square meter ink painting over the course of a twelve-hour outdoor public performance entitled Metamorphosis: To the Non-earthlings. Less than three months later, she created Epoché, a huge public performance and installation commissioned by the Shenzhen Bao’an International Airport. Working with the conditions of suspension, gravity, land, and wind, she bombarded an airfield with 20-kilogram oil-and-ink “missiles”—500 kilograms of material in total—at different heights from a helicopter. The resultant monumental canvas, a record of the performance and event, was hung centrally in the airport for a month. Nicknamed modan or “ink bomb,” the piece became an internet sensation.

In her March 2015 solo show at Ink Studio, she created a two-floor immersive environment with her massive 2013 work Wanwu. Wanwu is the most recent in her series of land and weather works created at sacred mountain sites in China that register the effects of wind, sun, humidity, air pressure, and terrain with ink and water on bespoke xuan paper. Installed again in a different manner for the Encounters public program of Art Basel Hong Kong 2016, Wanwu was a highlight of the art fair and was centrally featured in a variety of media outlets, including being selected as one of the top fifteen booths by Artsy. Recently, Bingyi has extended her nature paintings to incorporate the agencies of ice and sound waves.

At the other end of her practice, Bingyi explores the microscopic origins of organic life in intimate, small-format paintings, in which her minute and meticulous brushwork paradoxically reveals a profoundly creative, gestural, and “calligraphically expressive” quality drawn from her daily calligraphy routine. Through her hypnotic, obsessive endurance and execution both painstaking and nuanced, one senses the loving power of nature itself as it crafts animate life from inanimate matter. Her encyclopedic series Fairies are “catalogues” of the endless virtual forms assumed by organismic life, each with an associated personal anecdote or poetic fantasy.

In recent years, she has turned her attention to film-making. Part of a larger project documenting the disappearance of Beijing hutong, her narrative film trilogy Ruins will premier at the Los Angeles County Museum of Art and Ullens Center for Contemporary Art in spring 2019.

Bingyi’s works can be found in the White Rabbit Contemporary Chinese Art Collection, Sydney, Australia; and the collections, among others, of, the Smart Museum of Art, University of Chicago, Chicago, USA; Museo de Arte Contemporaneo de Alicante, Alicante, Spain; and Museum of Chinese Women and Children, Beijing, China. She has been the subject of three documentaries: The Enduring Passion for Ink—A Series on Contemporary Ink Painters: Bingyi’s Madness, on Bingyi’s process as an ink painter, filmed by Richard Widmer and directed by Britta Erickson; Shape of the Wind, on Bingyi’s land and weather art, and Epoché, on Bingyi’s Shenzhen airport performance/event, both filmed and edited by Richard Widmer. 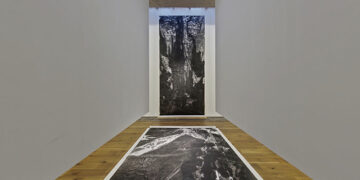