Born in Yunyang, Sichuan and a graduate from Sichuan Fine Art Institute, Tao Hui currently lives and works in Beijing, China. With an initial degree in Oil Painting, Tao traversed into the art of video and installation, drawing from personal memories, visual experiences and popular culture to weave an experimental visual narration, the focus of which is often our collective experience. Running throughout his work is a sense of misplacement vis-à-vis social identity, gender status, ethnicity and cultural crisis, prompting the audience to face their own cultural histories and living conditions.

Located in the northeast of Chongqing in China, Yunyang borders the Sichuan Basin whose cultural environment constitutes a melting pot of collected memories, folklore, hearsay, and reality. Subtly evolving beyond these cornerstones is Tao’s practice, which comprises multiple captures along a singular sequence: a flutter of the imagination, a nonsensical remark, a day in passing. ‘1 Character & 7 Materials’ (2015), for instance, features seven 1-minute videos conceived from Tao’s journal, depicting ethnic minority girls in the rain, a journalist interviewing a corpse, and a spirit cruising a river.

An aspiring filmmaker, who perchance took oil painting as an initial standing point, Tao was exposed for the formative parts of his early years to a fascination with television as a portal to the world beyond rural Yunyang. Citing domestic TV shows as inspiration, Tao’s cinematography explores our existence in light of increased digitisation, as well as the status of television as a cathartic twist on the trials rooted in daily life. As such, Tao prompts considerations regards the dynamics between life and theatricality: is life imitating art, or is art documenting life?

In 2017 Tao Hui was nominated for HUGO BOSS Asia Art Award for Emerging Artists, where he presented ‘Hello, finale!’ (2017), a video installation conceived from his residency in Japan. Multiple screens depict nine people from all walks of life across Japanese society – including a waiter, a school girl, a child, a religious ascetic and a media professional – engaging in phone conversations about endings and death. The nine videos on display, which share no actual connection. Tao has in fact created a realm of possibilities beyond the conceived limits of television and film using the language of video, installation and audience engagement. ‘Hello, finale!’ elevates the experimental concept behind ‘1 Character & 7 Materials’, bringing to transcendence Tao’s visual semiosis. 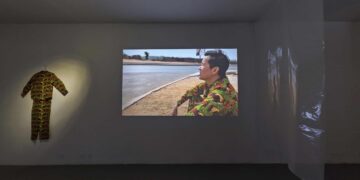 ASSEMBLAGE - A project on migration in relation to China, V.A.