White Cube Bermondsey opened in October 2011 and is the largest of all the gallery’s sites, incorporating more than 5440m² (58,000 sq ft) of interior space. The building, which dates from the 1970s, was renovated and designed by London and Berlin-based architects Casper Mueller Kneer and includes three major exhibition spaces as well as private viewing rooms, office space, a warehouse, an auditorium and a bookshop. The ‘South Galleries’ provide the principal display area for White Cube’s expanding programme of exhibitions and three smaller galleries, known collectively as the ‘North Galleries’, are used for an innovative series of shows. In addition, at the centre of the building, a top-lit, 81m² gallery entitled ‘9 x 9 x 9′, is used for special projects or for the display of a single artwork or installation. Since its inception, the building has hosted a variety of important exhibitions such as the first UK showing of work by American artist Theaster Gates, a comprehensive retrospective of prints by Chuck Close and the largest presentation of Anselm Kiefer’s work ever staged in London. To accompany these exhibitions, an education programme and an ongoing series of artists films, feature films and lectures takes place in the purpose-built 60 seat auditorium.

White Cube Mason’s Yard opened in September 2006 in a courtyard off Duke Street St James’, nearby to the original White Cube space. The building, constructed on the site of an electricity sub-station and designed by London based MRJ Rundell & Associates, is the first free-standing structure to be built in the historic St James area for more than 30 years. The building houses two major galleries that provide a total of 1110m² (11,900 sq ft) of exhibition space, comprising of a ground floor gallery on street level and a double-height, naturally-lit basement gallery. Used for White Cube’s expanding programme of exhibitions, White Cube Mason’s Yard has hosted a wide range of exhibitions by international artists including Andreas Gursky, Georg Baselitz, Jeff Wall, Anselm Kiefer, Robert Irwin and Miroslaw Balka. The gallery opened with an inaugural exhibition by Mexican artist Gabriel Orozco.

The first of White Cube’s galleries to be located outside of the UK, White Cube Hong Kong is situated at 50 Connaught Road, in the heart of Hong Kong’s Central district. Since its inception in March 2012, the gallery has hosted a varied programme of exhibitions including Gilbert & George, Anselm Kiefer, Damien Hirst and Cerith Wyn Evans. The gallery provides an interior exhibition space of 550m² (6000 sq ft) which is set over two floors and has a ceiling height of over 4.5 metres. The building was designed by London based architects Maybank and Matthews. 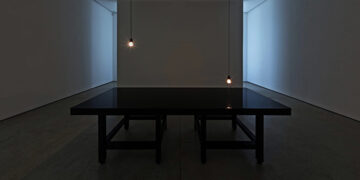