Zheng Lu (born 1978 in Inner Mongolia, China) is an artist based in Beijing. Zheng Lu studied at Lu Xun Fine art Academy from 1998-2003 before continuing to Beijing’s prestigious Central Academy of Fine Arts from 2004 until 2007. While still in school Zheng won the LVMH Prize which provided the artist with three months training at The École nationale supérieure des Beaux-Arts, ENSBA, Paris. Zheng has mainly produced sculpture and installation work with steel structure, and also two-dimensional, multimedia, stage and public art.

Zheng gradually constructed and perfected his art logic and language system in the continuous practice. He integrated various concepts such as material, writing, water, time and space into his self-contained conceptual framework, and formed his own unique expression of language. Meanwhile, his work also implies the diversity and possibility of the state of life and discusses how to deal with the relationship between nature, self-nature and ego. 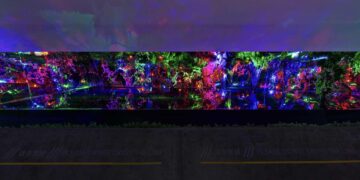